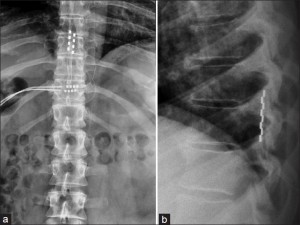 Selecting the Level of Stimulation
The representation of the dermatomal level in the dorsal columns of the spinal cord is much higher than the corresponding vertebral level. For instance, the sweet spot for sciatic pain (dermatomal level L5/S1) is around T10 nerve.

Electrodes Selection
For the SCS to be effective, the area of paresthesia must overlap the area of pain. Selection of leads depends on which arrangement will give the best paresthesia coverage to the painful area. At present up to 16 electrodes can be stimulated by one system. A patient could have two octrodes (eight lead electrodes), which can be placed parallel to each other or at two different vertical sites. Four quatrodes (four lead electrodes) could be inserted to cover two different sites bilaterally or up to four sites vertically.

Generator Implant
The IPG or the RF unit is usually implanted in the lower abdominal area or in the posterior superior gluteal region. It should be in a location that patients can access with their dominant hand for adjustment of their settings with the patient-held remote control. The decision to use a fully implantable IPG or an RF unit depends on several considerations. If the patient’s pain pattern requires the use of many electrodes with high power settings, an RF unit should be used. The IPG battery life will largely depend on the power settings utilized, but the newer IPG units will generally last several years at average power settings.

Programming
Programming involves selecting the electrode stimulating configuration, adjusting the amplitude, width and frequency of electrical pulses. Amplitude indicates the intensity of stimulation. This is set within a range of 0–10 V according the type of electrode used and the type of nerves stimulated. Lower voltage is chosen for peripheral nerves and paddle type electrodes. Ideally paraesthesia should be felt between 2 and 4 V. Pulse width usually varies from 100 to 400 us. Widening the pulse width will also broaden the area of paraesthesia. Frequency of pulse wave is usually between 20 and 120 hertz. It is an individual preference: some patients choose low frequency beating sensation whereas others prefer high frequency buzzing.
Selection of lowest possible setting on all parameters is important in conserving battery life in non- rechargeable models of SCS. Cycling of stimulation is also employed to save battery life. Changing of stimulator program may have to be undertaken during the course of therapy and follow-up.

Patient Selection
Appropriate patients for neuro-stimulation implants must meet the following criteria: the patient has a diagnosis amenable to this therapy, the patient has failed conservative therapy, significant psychological issues have been ruled out, and a trial has demonstrated pain relief. A trial period of stimulation over a period of 5–7 days should follow a psychiatric evaluation to demonstrate its effectiveness. This part of the protocol is important because of the cost of the equipment and the invasive nature of the procedure. The trial is considered successful if the patient achieves more than a 50% reduction in pain.

Indications
The most common use of SCS is failed back surgery syndrome (FBSS) in the United States and peripheral ischemic pain in Europe.
FBSS, classified as mixed pain syndrome (neuropathic and nociceptive), is the persistent or recurrent pain, mainly involving the lower back and/or legs after successful spinal surgery. It affects about 40% of patients who undergo spinal surgeries. Several studies showed overall efficacy of the SCS for FBSS.
SCS is also indicated in the treatment of inoperable ischemic limb pain. Furthermore, this technique is studied in various applications. For instance, it has been shown to modulate the function of sympathetic nervous system and increase norepinephrine release in refractory angina pectoris, decreasing the probability of angina attack. SCS units have been used to treat patients with frequent migraines. The electrodes are implanted in the bilateral suboccipital region.

Advantages and Disadvantages
SCS is analgesia on demand. It is a useful option when other forms of therapy fail. It reduces pain medication and side effects. It is effective in about 50–70% cases. It is an invasive procedure, so it can have associated complications such as infection, bleeding, and dural puncture. It has the risk of disconnection or equipment failure.
SCS interaction with diathermy, pacemakers, MRI and therapeutic ultrasound can result in unexpected changes in stimulation, serious patient injury or death. It can also lead to failure of the device.